For various reasons, I have been experimenting with the Bitcoin and Etherium currencies. While I do not have a vast fortune, I still wanted to generate and store my private keys in a safe and secure manner.

What I really wanted was a Leger Nano S. These at the time, however, are backorered for months. So I started to explore methods for generating and storing keys.

I decided the Raspberry Pi Zero 1.3 was an good platform for this endevor:

END_OF_DOCUMENT_TOKEN_TO_BE_REPLACED 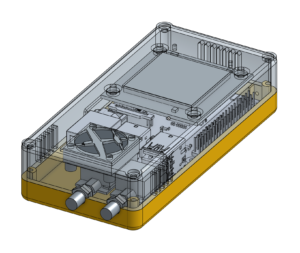 Stratux is a project to provide ADS-B data to ‘electronic flight bag’ apps. It can receive “next gen” transponder information, as well as weather and advisories from ground stations. A GPS module provides location, and gyros, accelerometers, magnetometers, and pressure transducers can even provide limited attitude and heading reference (AHRS)

I took some time to design a nice case that holds all the components. I designed a “HAT” for the Raspberry Pi that holds the GPS module and provides fan control. (Originally this Pi Hat had GPIO 4 controlling the fan. I’ve updated the design to use GPIO18, which is used by other Stratux fan controllers and by the software. I have not made or tested this revision.)

You can find the STL files on Thingiverse. This design is meant to be used without the hat, and the GPS module is mounted to the top case directly.
You can find the design files for the hat on GitHub.

This video was made to to help @indigi_newton with troubleshooting his wifi card build. Even though the video is from the perspective of helping a single person troubleshoot a card, it is still a nice overview with a demonstration of it working in a Newton. 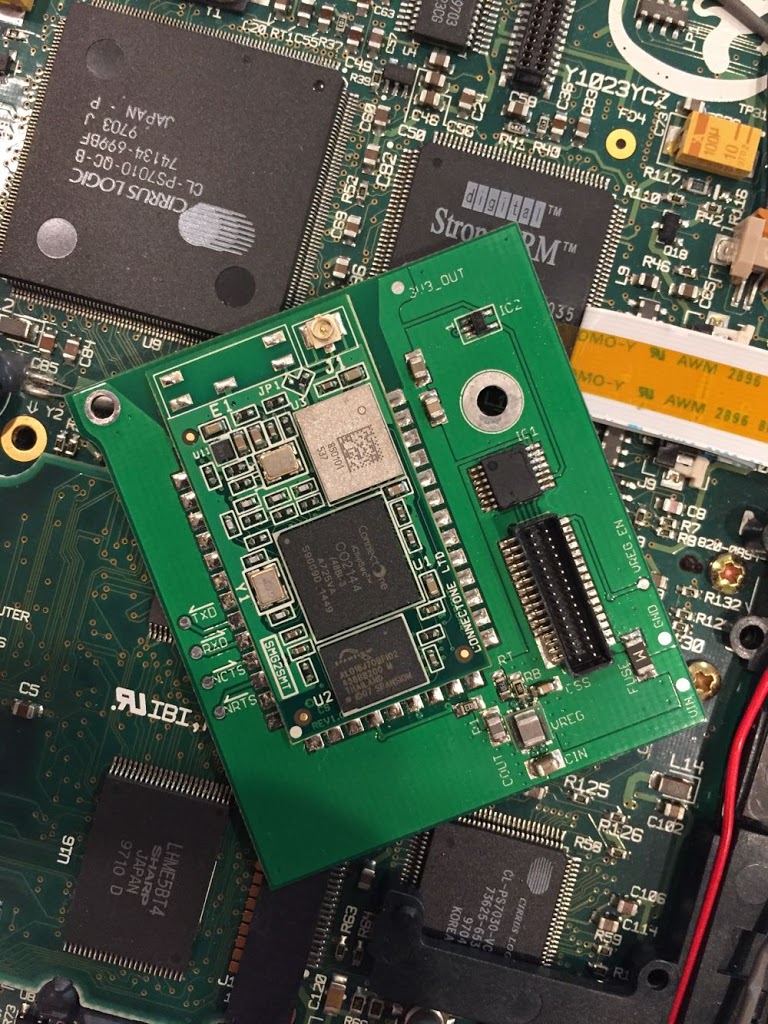 You can find the files for this project in GitHub: https://github.com/jake-b/Newton-Internal-WiFi

Since the MP2x00 did not come with an internal modem (and one was never sold), each MessagePad came installed with a little plastic cover that fills the space where the RJ-11 jack would be.

This is the same cover where apple would place a “2100” sticker indicating that a MP2000 was upgraded to a 2100.
Due to an oversight, the WiFi card extended into the area where this plastic cover would sit.  (I’m not sure this could have been avoided, even if I had planned ahead)

Instead, I’ve designed a replacement cover that does not interfere.  For good measure, I added an embossed WiFi logo to indicate that the internal WiFi card is present.

I think it makes for a nice finished product.

The STL files for the port cover can be found here: https://github.com/jake-b/Newton-Internal-WiFi/tree/master/Port%20Cover 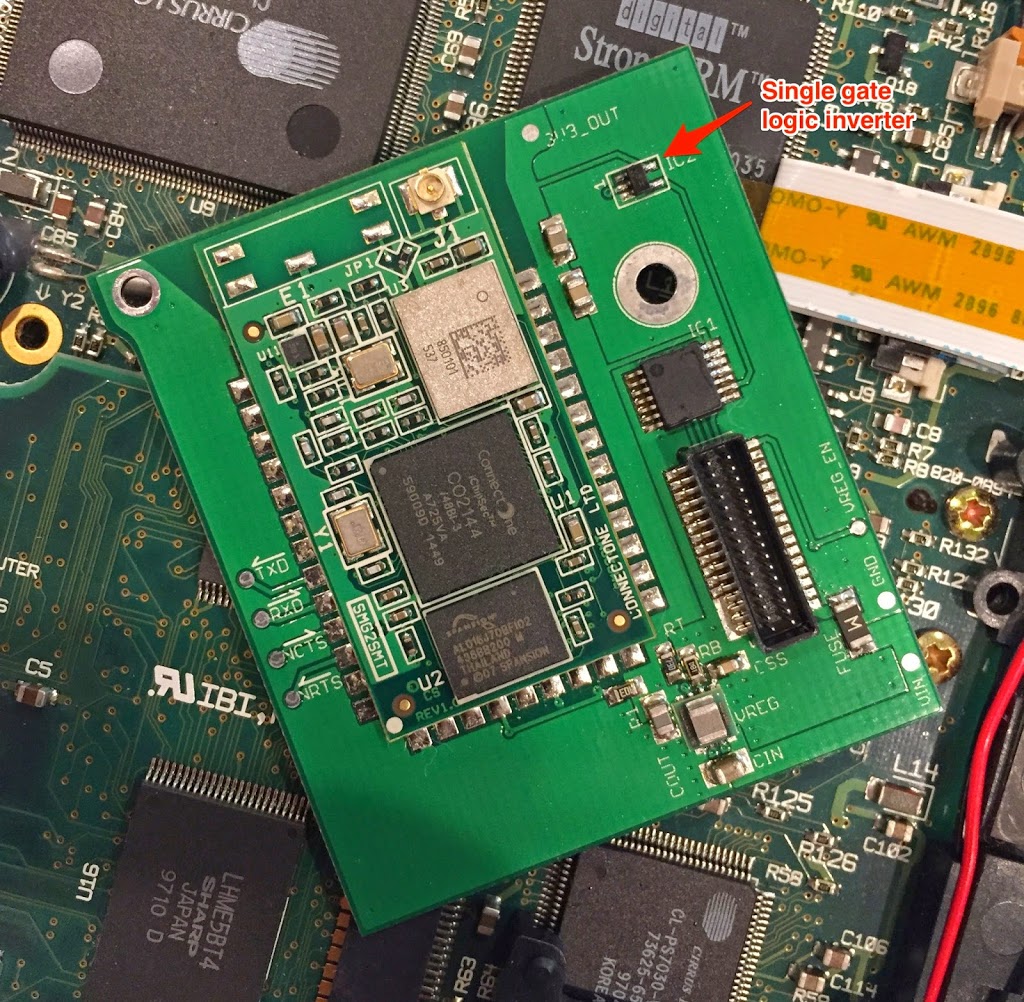 I got the revised boards and finally found some time to assemble a board.  This board adds a logic inverter to fix the flow control, and removes some extra traces for an alternate reset circuit. 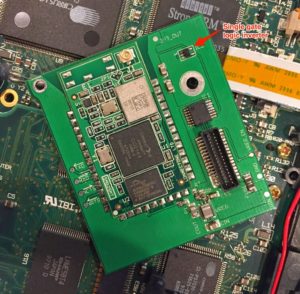 To assemble the board, I had a stencil made and used it to apply solder paste.  Then I placed the components using a very simple “pick and place” rig: 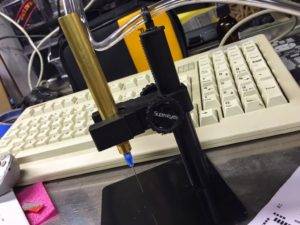 This jig was made from a piece of brass tube, a leur lock fitting, some tubing, and a 22ga blunt dispensing needle.   It was mounted in a cheap USB microscope holder (available on eBay or Amazon) and hooked to a vacuum pump that I already had.   There are many more complicated versions of this rig on the internet, but this simple setup worked fine for me.

Finally, I baked it in a toaster oven that I got for free at a garage sale, and a rocket scream reflow shield.

Everything works great.  I consider this project a success.  All thats left to do now is to 3D print a replacement for the plastic “plug” that covers the hole in the case.

Finally, a little application that uses the method mentioned in an earlier post to enable the board when the ‘modem’ port is opened: 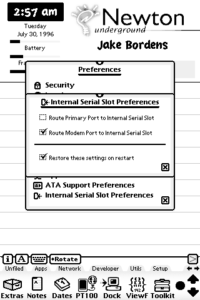 I wanted to do a real world test.  The WiReach specs say that it can draw around 350mA peak during transmit.  I modified the Thumb sample code into a program that would output a continuous stream of ~25kB packets.  I taped a thermocouple to the regulator and ran the test for an hour or so.

The results were promising.  From room temperature, the regulator went from 77.4F to a high of 85.1F.  This satisfies me that in my normal use the board will not overheat.

A wise man once told me:

“People might be using such a Newton on a camp site close to Death Valley in August. Before you release such a circuit into the wild, you should put the assembly into the baking oven at 60 degrees centigrade and see what happens…”

Good advise, but I don’t think I’ll be performing that test.  I just can’t imagine putting a Newton in a oven for any amount of time.

This test is anecdotal at best, I guess.  Was the WiReach module anywhere near its peak transmit power or current draw?  I don’t know.  At 115200bps, I’m not sure that the Newton can saturate the WiFi module such that it would need to draw its maximum.

I found one other minor issue with the physical design.  I intentionally pushed the module as close to the edge of the Newton as possible– into the space where a telephone jack would have been for an internal modem.  The module is large and getting it in just the right place and keeping the board within a 5cm square took some trial and error.  Also, I wanted the antenna area as close to the edge of the case as possible.

Well this made for one unintended consequence– the “plug” that covers the hole likely won’t fit, and it will interfere with the WiReach antenna connector and board.   It isn’t the end of the world really — I intend to 3D print a new plug with a little more clearance, and maybe an embossed WiFi logo so you can tell from the outside that there’s a WiFi card installed. 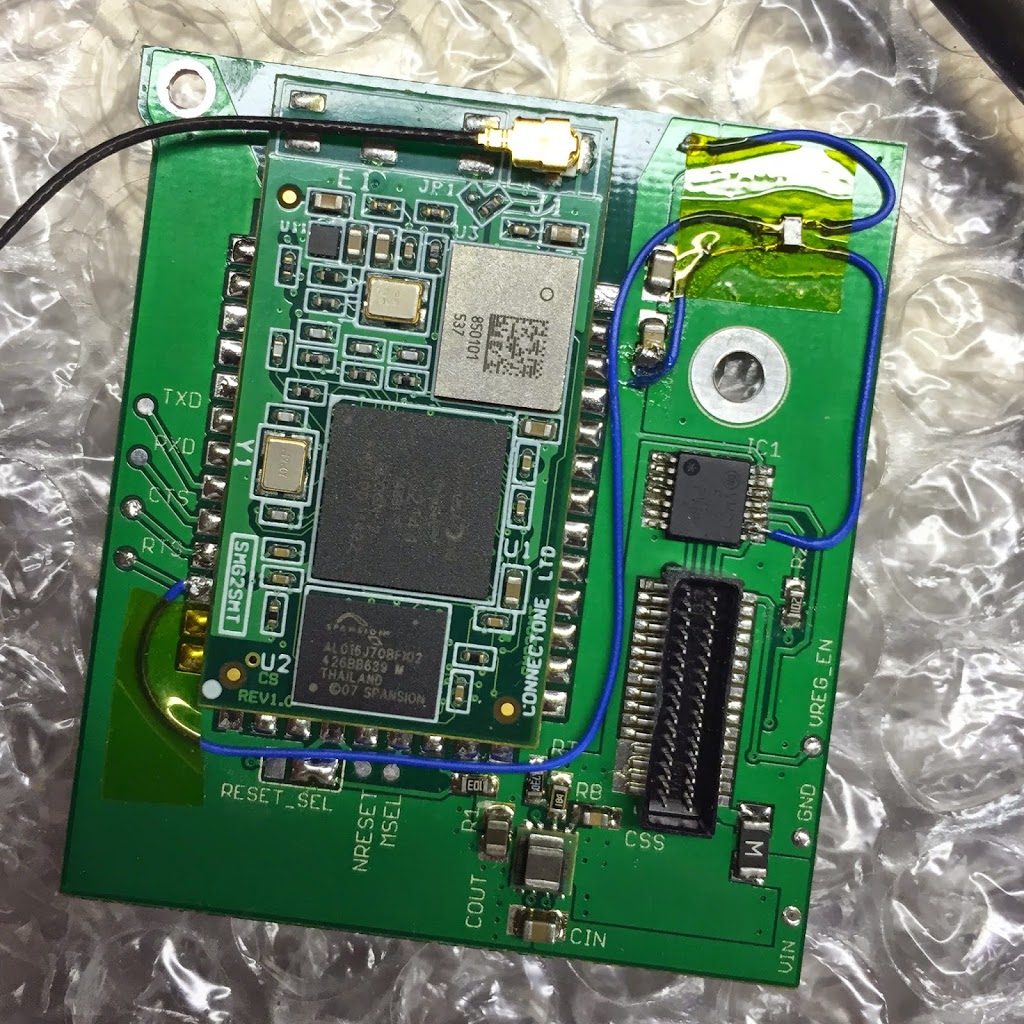 It is ugly, but it works: 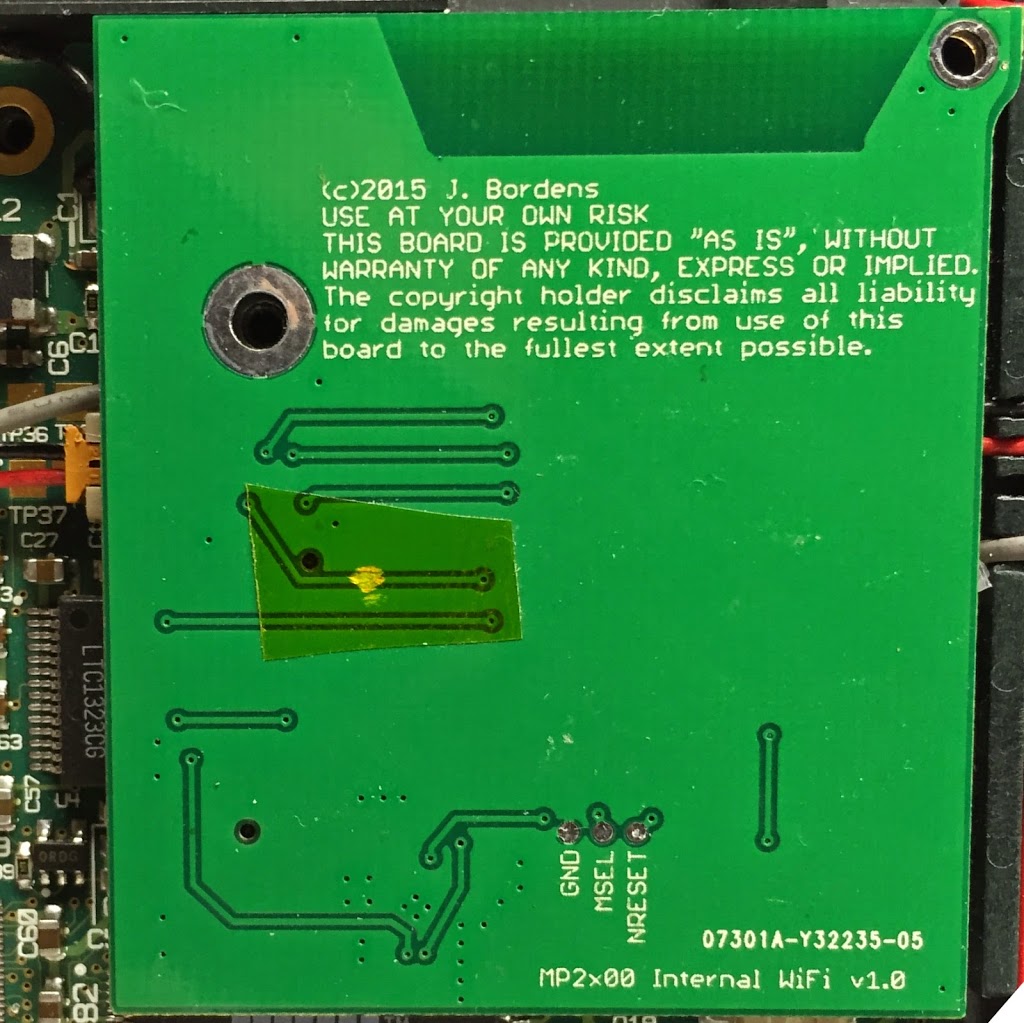 I soldered leads to a 1-gate logic inverter.  This wasn’t easy because the part is so small.  Then connect it to 3.3v, GND, and the RTS line coming out of the WiReach.  Then I cut the RTS trace on the bottom of the board.  I connected the output of the inverter to the input of the line driver IC.

Some Kapton tape holds it all in place.   It is a really terrible hack, but it works.  Hardware flow control works as expected, now.

I’m going to design a version 1.1 of the board that includes the inverter.  Also I can remove the extra GPIO/Reset stuff since the “power good/reset” circuit works. 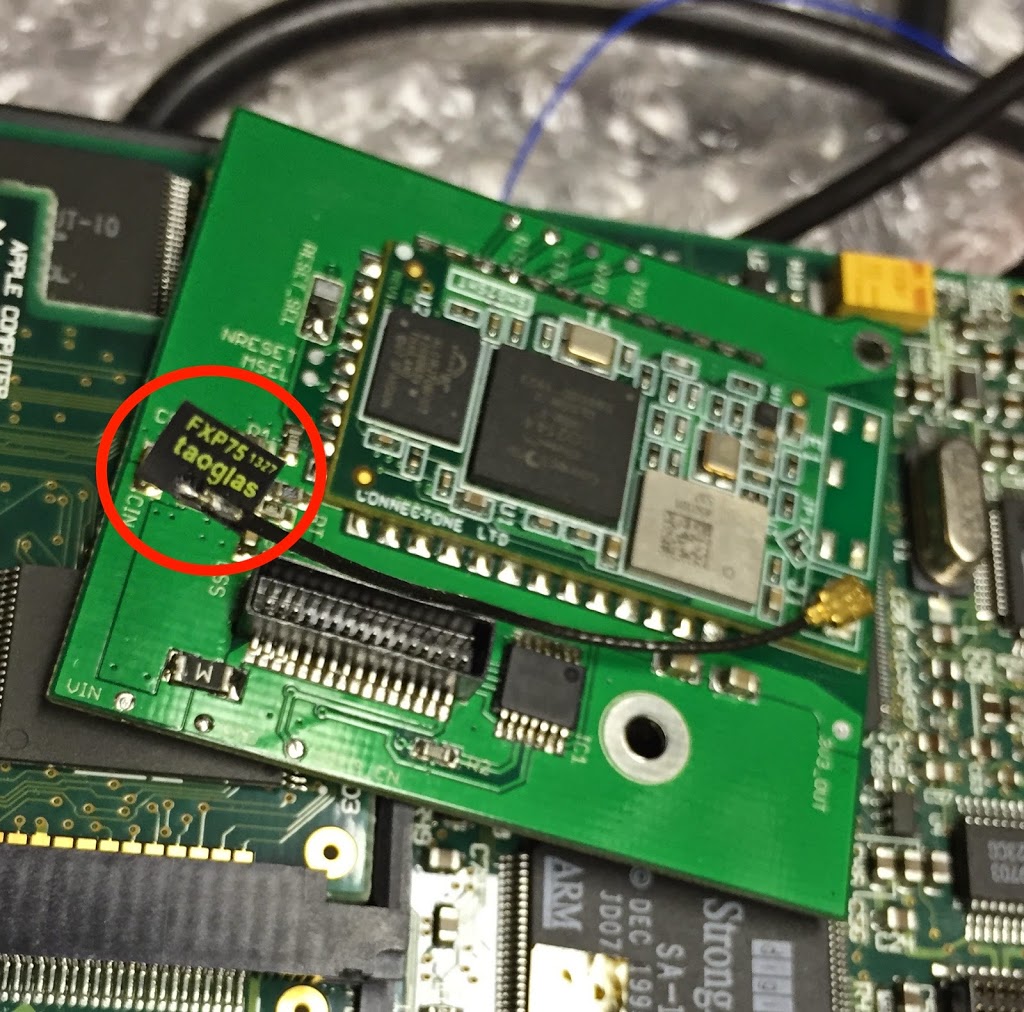 I’m going to call this one a success.

There is an error in the hardware flow control circuit, but that’s due to an error in the N2 Platform documentation.  I’ll take responsibility because I should have more thoroughly prototyped (which I thought I had, but oh well)  I’m still planning on hacking an inverter onto the board to fix the issue.

Even so. I’m chalking this one up as a success. 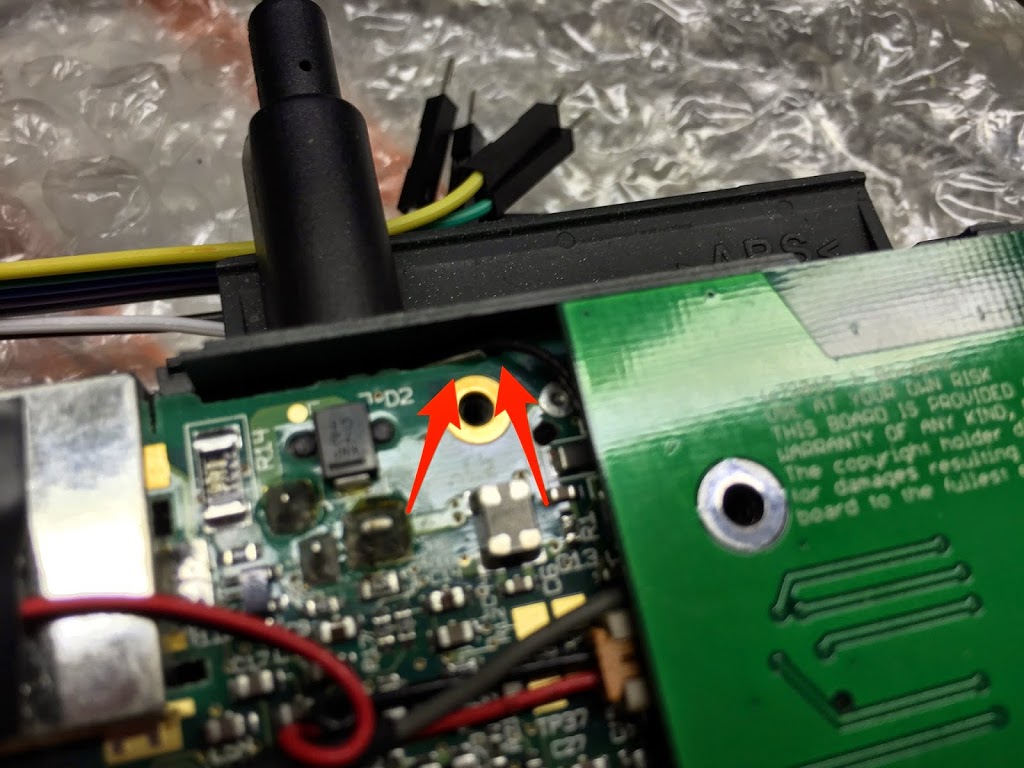 I found a really small antenna.  I think its really for bluetooth devices, but it seems to work fine.  It is so small, I was able to tuck it in a small gap between the power connector and the interconnect port.

You need to send a few specific commands to configure the WiReach module.  The most important is AT+iWANS=1  which tells the WiReach that the WiFi network is the WAN subnet.  Also you need to configure a username and password (which matches the PPP configuration on the Newton.)  AT+iRAU and AT+RAP are the commands you use to set the username and password.  And of course you’ll need to connect to your network using:

I use PT-100 to configure the module.  Then a Serial Internet configuration with a script.  The script is simple.  First, it pauses for a few seconds to give the module time to power on.  Second, it sends the at+iSPPP:0 command to start the PPP server.  Finally, it waits for the OK.

How Does it Work?

My goals when I started this were:

In all, despite the flow control thing, I’m pretty happy with the end result.  The project meets my requirements.

I’m trying to decide if I want to do a v1.1 board with corrected flow control signals.

Up till now, I have been following Ekhart’s template for enabling the serial signals: directly calling the ROM functions to toggle SerPortSel.  The only issue with this approach is that the OS also toggles these signals when a port is opened.  This means you have to configure the signals after the serial port is opened.

Wouldn’t it be great if you could tell NewtonOS that you wanted SerPortSel to be “set to internal” when you open Serial0 or Serial3?

These functions need an index or ID of the subsystem involved.  Again, looking at the disassembly, you find the relevant index.  There may be more, but the ones involving the serial port are:

Again, the constant names are invented.  So some simple pseudocode to tell NewtonOS “when you open ‘mdem’ set SerPortSel3 to HIGH” might be:

When the serial port is opened in software, the NewtonOS reads the bitmask and enables the proper voltage supplies and sets the SerPortSel apporopriately.  When the port is closed, the GPIO line is returned to its default state.  Note for Serial0, the default state is “internal” (HIGH) until you open the port, as this disables the LTC1323 (used on the external port), probably to save power.

These settings are reset on reboot, which I think is probably for the best.  You could always have a Pacakge that sets the flags on boot.

Currently, this is what I consider the “right way” or at least the “best known way” to use the serial port select signal for the internal slot.  It is much better than manually toggling the signal with the SerialPortXLineDriverConfig functions.