I recently updated my Macbook Pro with a SSD drive.  I decided to ditch the optical drive and install the old drive in a DVD Caddy.  With my bulk storage for iPhoto and iTunes on my old drive, and my applications and system files on the new SSD, I was ready to have the best of both worlds– speed and storage.

Unfortunately, the old HD turned out to be a bit of a burden.  While it would spin down when not in use, it would occasionally spin up at inopportune times.  At times it was understandable, a file-save dialog or when running Disk utility.  At other times, it was inexplicable.  And what’s worse, is that it freezes the whole machine for 1-2 seconds while the drive spins up!

So I decided to write a little program that would mount and unmount the drive on-demand.  The application sits in the menu area and waits for iTunes or iPhoto to launch.  When it detects one of the applications launching, it sends it a SIGSTOP to pause the app.  Once the drive is mounted, it sends a SIGCONT message to continue the application’s launch process.

When an app quits, it checks to see if there are any remaining apps running that are on the list. If not it will unmount (eject) the drive.  The app also has the ability to keep the drive mounted if you need to manually poke around on the other volume. 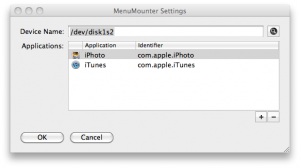 I also integrated with Growl to have the app explain what it is doing and when.

Its not really ready for prime time, but I am considering packaging it for the Mac App Store if there is enough interest.  The question is… would 150 people be interested in it enough to shell out $.99 to make the cost of buying into the developer program worthwhile?  75 people shell out $1.99?  I’m guessing not.  If you’re really interested in the app, get in contact, maybe I’ll package a time limited test version.