I purchased a carbon fiber kit from a guy named John. He called his company ‘OMZ Motorsports’. After screwing up and shipping my kit to the wrong guy, I finally was able to meet the other guy and swap packages and get my kit.

Sadly, the arm rests in the convertible are different than in the coupe, as you’ll see below. So, I sent the coupe ones back to John and also two OEM cabrio arm rests to have molded in CF. For good measure, I ordered a set of Angel Eyes.

Then John disappeared. He basically screwed me out of four arm rests and $200 or so for the Angel Eyes. I eventually bought the Angel Eyes anyway.

There are some slight differences between the convertible and the sedan, in terms of the trim.
The first thing I noticed was that the convertible has an extra button on the console:

Luckily, the sedan has a child window lock button in the same place that the covertible has the “all windows” button.
John broke up a coupe and sedan set to provide me with the right console. Yay. Too bad he screwed me out of the other stuff.
There was one other difference in the convertible: the coupe has larger back arm rests. 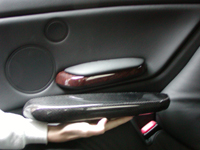 As of now, I haven’t been able to come by rear CF rests for the cabrio.

Plan-B was to get the shadow titanium arm rests from an M3 convertible. They’re a nice shade of gray that will match
better than the stupid wood trim. It looks good. 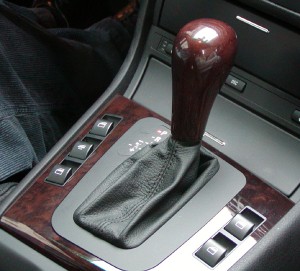 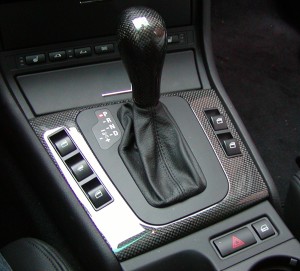