I just think these are really cool. The BMW 5 series comes with small fiber optic rings that sit around the headlights. These ‘halos’, called Angel Eyes, define the classic BMW headlights in an amazing way. If you’re a 3-series owner like me, you need to get them after market.

I bought my original kit from FiberDesign.biz after getting screwed out of a set by John from OMZ Motorsports
(see my cabron fiber page for more on that story.) The FiberDesign kit was by far the brightest set of halos at the time. The light boxes under the hood are a bit large, and not so pretty to look at, but they get the job done. 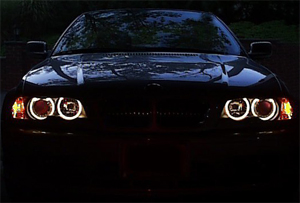 FiberDesign has since come out with new halos. I’ve contacted them several times, but get no answer. I wanted to buy new halos and new fiber optic cable to redo my lights and hopefully get an even brightness over all four halos.

I’ve since bought a new GenV Angel Eyes kit from Umnitza. The kit looks like it has much briter halos, and claims to have a
better light box that runs cooler. Hopefully the cable won’t get brittle with time, but so long as they look good and evenly bright,
I’ll be happy.

I’ve since installed a Cold-Cathode tube version of the angel eyes, and am very happy with them.  They emit light directly with thin power wires that attach to the halos. This is ideal– they don’t interfere with the auto-leveling and look great.